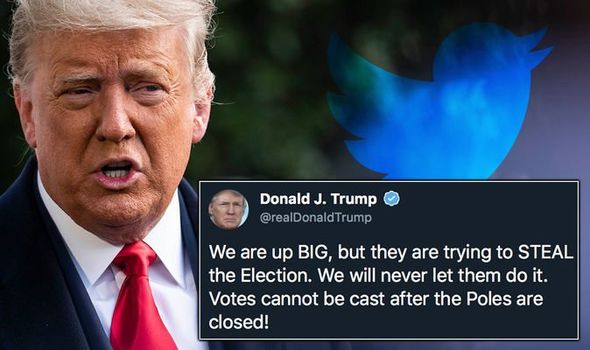 Washington: On Wednesday, Twitter posted a tweet in which President Donald Trump accused Democrats of trying to steal the presidential election.

“We are up BIG, but they are trying to STEAL the Election,” Trump wrote on Twitter moments after Biden told supporters he expected to win.

US dollar slides to lowest level in almost 6 months

Smartphone giant Xiaomi reels as US ramps up China blacklist

Posted on January 15, 2021
Hong Kong: Xiaomi’s stock price fell on Friday after the US blacklisted the smartphone giant and many other Chinese companies as the Trump administration...
Read More

Posted on October 14, 2020
Technology giant Apple released the long-awaited iPhone 12 and other products on Tuesday night. However, certain decisions made by the company made users angry....
Read More

Posted on October 16, 2020
Oakland, California: Following Twitter and Facebook, YouTube said it is taking more measures to limit QAnon and other unprovoked conspiracy theories that may lead...
Read More

Posted on May 14, 2021
A U.S. judge on Thursday dismissed an antitrust lawsuit filed by a group of advertisers against Alphabet Inc. Google, but gave them the opportunity...
Read More