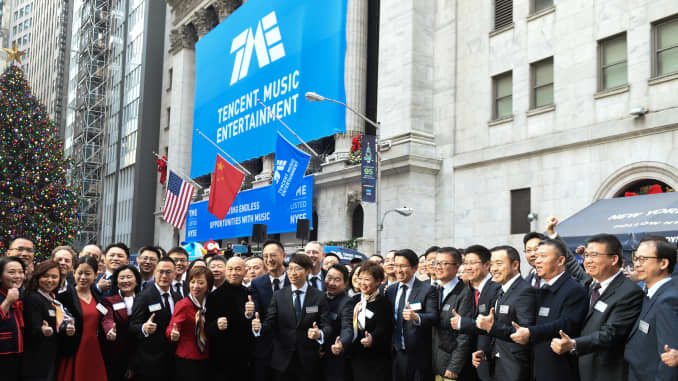 It said in a statement that the Chinese music streaming company may repurchase up to $1 billion in Class A common stock in the form of American Depositary Shares within twelve months starting on March 29.

According to the US Securities and Exchange Commission (SEC), if foreign companies fail to comply with US auditing standards, they will be expelled from US exchanges, and the share prices of dual-listed companies in China, including Tencent Music, will fall sharply.

The company’s shares were further pressured on Friday after a sell off in its stock – and those of several others such as Baidu Inc and ViacomCBS Inc – by Goldman Sachs, according to an email to clients seen by Bloomberg News.

Bloomberg and the Financial Times on Saturday reported that Goldman liquidated more than $10 billion worth of stocks in these companies in block trades.

CNBC reported that the selling pressure was due to liquidation of positions by family office Archegos Capital Management.

The share price of Tencent Music, which was listed in the United States last week, fell by more than one-third.

PPP decides to increase contacts with Hamza instead of Maryam Nawaz

Posted on October 9, 2020
Islamabad: Pakistan has blocked the Chinese-owned social media application TikTok after Pakistan failed to fully comply with the instructions to “establish an effective mechanism...
Read More

Posted on November 20, 2020
Islamabad: Internet and technology companies have threatened to leave Pakistan after the government grants the authorities the power to fully censor digital content. Critics...
Read More

Posted on January 29, 2021
Tesla has shared the first batch of information and images of the updated Model S. Unlike the previous update, it has introduced a brand...
Read More

Posted on November 25, 2020
Twitter Inc. on Tuesday released a plan for a new policy on how to “verify” websites. The company has long promised to transform this...
Read More

Posted on April 15, 2021April 15, 2021
The two companies said on Thursday that Facebook has signed an agreement with a local company’s wind power project to purchase renewable energy in...
Read More