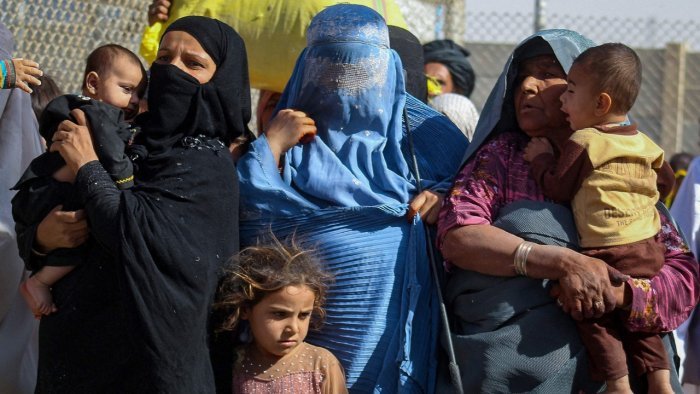 Geneva: The head of human rights at the United Nations expressed serious concern about the situation in Afghanistan after the Taliban came to power on Tuesday, saying that their treatment of women would mark a “basic red line.”

Michel Bachelet delivered a speech at the emergency meeting on Afghanistan, urging the Taliban to honor their commitments to respect the rights of women and girls, ethnic and religious minorities and avoid retaliation.

“The onus is now fully on the Taliban to translate these commitments into reality,” she said.

“I strongly urge the Taliban to adopt norms of responsive governance and human rights, and to work to re-establish social cohesion and reconciliation, including through respect for the rights of all who have suffered during the decades of conflict,” Bachelet told the council.

“A fundamental red line will be the Taliban’s treatment of women and girls,” she said, urging “respect for their rights to liberty, freedom of movement, education, self expression and employment.”

“In particular, ensuring access to quality secondary education for girls will be an essential indicator of commitment to human rights.”

On Tuesday’s meeting, after the Taliban warned that the evacuation would only last another week, the U.S. military was making increasingly desperate efforts to airlift thousands of people out of Kabul.

Crowds continue to gather outside the airport, and many Afghans are afraid to face life under Taliban rule.

The militants have repeatedly promised to impose a different kind of rule on their brutal regime of the 1990s, which restricts women at home, prohibits most recreational activities, and punishments including stoning and public executions.

However, due to reports that Taliban fighters went door-to-door in recent days looking for opponents, including journalists, their rebranding was suspected.

Even before the Taliban took over, the United Nations stated that the number of civilian casualties in Afghanistan has increased dramatically in recent months.

Bachelet said her office had received credible reports of serious violations in places that have been under Taliban control, including summary executions, restrictions of women’s rights, blocking girls from attending school and recruitment of child soldiers.

“Human rights violations undermine the legitimacy of the perpetrators, both vis-a-vis the people, and also with respect to regional and international institutions and other states,” she warned.

Universities suppose to be centers of quality conventional: Shafqat

Posted on February 8, 2021
Rishikesh: Officials said that fourteen people were confirmed dead on Monday, a large glacier burst and caused a devastating flash flood in India, and...
Read More

Posted on August 12, 2021August 12, 2021
Moscow: Russia on Thursday reported its highest daily coronavirus death toll since the start of the pandemic, saying 808 people had died over the...
Read More

Posted on November 8, 2020
Wilmington: Democrat Joe Biden urged unity on Saturday and promised in his first national speech since winning the tense U.S. election and ending the...
Read More