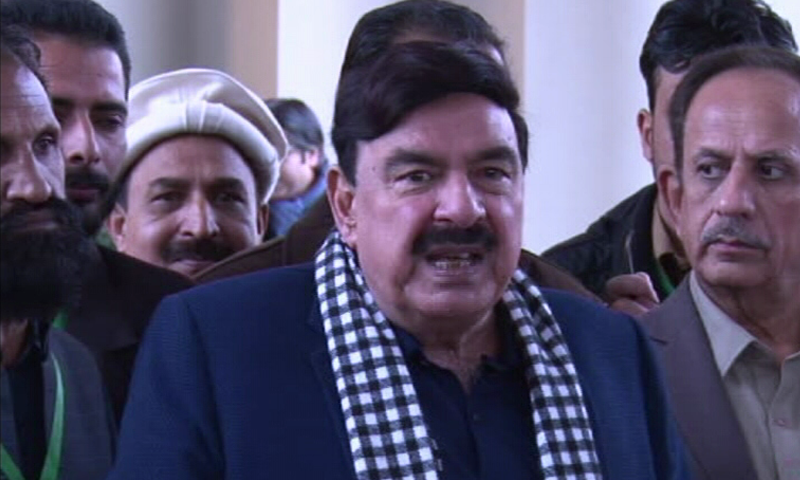 Talking to media persons the Interior Minister said it is a democratically elected government and under the leadership of Prime Minister Imran Khan, the country will be taken forward.

He said the government is ready to hold discussions with the opposition on all the issues except the corruption cases and the NRO. He said Prime Minister Imran Khan will never give NRO to the corrupt leaders.

Regretting the language being used by Nawaz Sharif against the state institutions, the Interior Minister said we are proud of our armed forces which have given immense sacrifices for the security and defense of the motherland.

Sheikh Rashid said that instructions have been issued to ease visa convenience for Chinese investors to attract investment in the country.
He said efforts will also be accelerated to ensure the return of innocent Pakistani prisoners struggling in foreign prisons.

The Minister of the Interior expressed his commitment to improving the state of law and order in the country. He said the performance of the Islamabad police will be further improved.

Global virus death toll passes 94,000, but some signs of hope

Posted on April 10, 2020
Brussels: In another horrifying day of the coronavirus pandemic, the global death toll exceeded 94,000, although there are preliminary signs that the crisis is...
Read More

Posted on July 17, 2020
Islamabad: Shahzad Akbar, the special assistant for the accountable prime minister, said Friday that the government has sent a sugar subsidy case to the...
Read More

Not a single Govt department in Sindh is free of corruption: Mustafa Kamal

Posted on March 20, 2020
Los Angeles: California becomes the first state in the United States to block its 40 million residents from a coronavirus pandemic. The statewide directive,...
Read More

US issues emergency approval for remdesivir for COVID-19 patients

Posted on May 2, 2020
Washington: President Donald Trump announced on Friday that the experimental drug rimcivir has been authorized by the US regulator to be used urgently against...
Read More