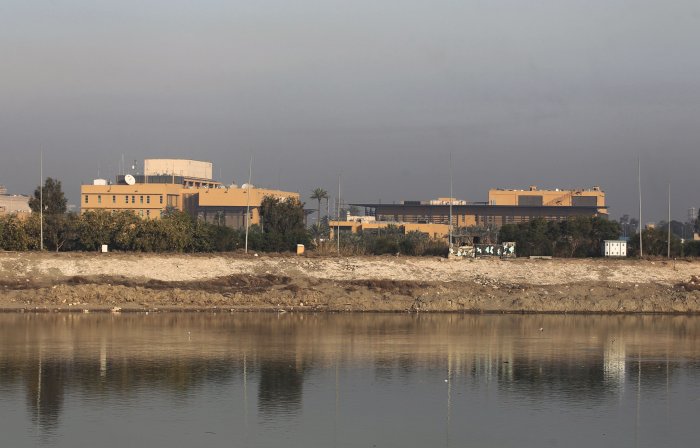 Baghdad: A volley of rockets exploded near the US embassy in Baghdad Sunday, as tensions mount ahead of the anniversary of the US killing top Iranian general Qasem Soleimani on Iraqi soil.

AFP reporters in the eastern part of the capital heard at least five roars on Sunday night, followed by howling.

Moments later, they heard the sound of thunderous rapid fire and saw red flares in the dark sky, indicating that the C-RAM rocket defense system of the US Embassy had been activated.

The Iraqi security forces issued a statement saying that the attack caused material damage, but no casualties.

A security source told AFP at least three rockets landed near the US embassy in the high-security Green Zone, while two others hit separate residential neighbourhoods.

An Iraqi man living across the street from the US diplomatic mission in a high-security residential compound told AFP that his building was hit.

“Everyone is screaming and crying. My wife is losing it from all the terrifying sounds,” he said, preferring to speak anonymously.

A congressman told AFP that his home was attacked by rocket fragments, which was probably caused by the deflection of the C-RAM or the explosion of the incoming rocket.

Since the fall of 2019, the U.S. Embassy and other foreign military and diplomatic sites have been attacked by dozens of rockets and roadside bombs.

In October, these groups agreed to an indefinite truce, but Sunday’s attack was the third obvious violation.

The first was on November 17, when a series of rockets violently hit various places in the U.S. Embassy and the Iraqi capital, killing a young woman.

These groups claimed that the attack was a smokescreen that US and Iraqi officials described as a well-known Iraqi armed faction allied with Iran.

But in an unusual move, several factions condemned the Sunday attack.

The populist priest and former militia leader Moqtada Sadr tweeted: “No one has the right to use weapons outside the state.”

Even Hezbollah, which was accused of other attacks, issued an online statement.

“Bombing the (US) embassy of evil at this time is considered out of order,” it said, while also condemning the US embassy s use of the C-RAM system.

The statement could be an attempt to calm tensions ahead of the anniversary on January 3 of the US drone strike that killed Soleimani and leading Iraqi paramilitary figure Abu Mahdi al-Muhandis.

Western and Iraqi officials told AFP they believe that Iran is looking to maintain calm ahead of US President Donald Trump s departure from the White House next month.

Trump has pursued a “maximum pressure” policy against Iran, an approach that has also squeezed its allies next door in Iraq.

Diplomats have feared a last-minute military action by the Trump administration on Iranian interests in Iraq, or a possible escalation by anti-US groups around Baghdad.

The US diplomatic mission has already partially withdrawn its staff due to security concerns, two senior Iraqi officials told AFP earlier this month.

They described the move as a “minor drawdown based on security reservations from the US side,” and said it was not a rupture of diplomatic ties.

Cold and dry weather expected in most parts of country

Posted on November 15, 2020
Washington: Republican President Donald Trump has gradually accepted the victory of his Democratic opponent Joe Biden and admitted his defeat, but still claims that...
Read More

Posted on September 3, 2020
Lahore: Pakistan has reported 10 deaths in last 24 hours by novel coronavirus as the number of positive cases has surged to 297,014. The...
Read More

Posted on April 30, 2020
London: The data released on Wednesday questioned the reaction of British Prime Minister Boris Johnson to the outbreak. The current number of European COVID-19...
Read More

US election campaign enters final day with nation on edge

Posted on November 2, 2020
Washington: On the last day of the US presidential election on Monday, Donald Trump and Joe Biden competed for votes at the last minute,...
Read More
National Style
Posted on January 24, 2020
Islamabad: Prime Minister Imran Khan has returned to Pakistan after a successful visit to Davos on Friday. According to detailed information, the Prime Minister...
Read More