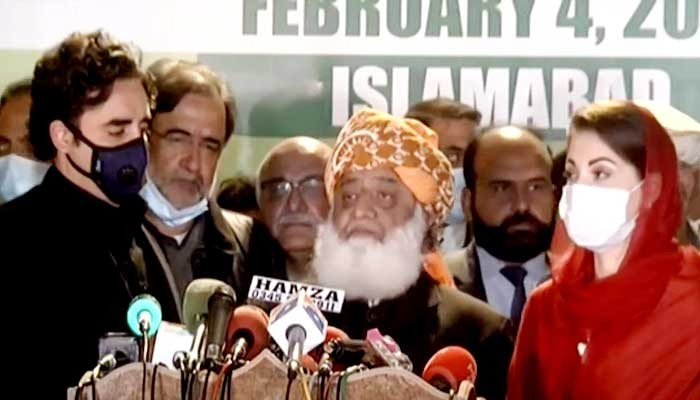 According to the details, a meeting of the anti-government alliance PDM was held under the chair of senior PML-N leader Ahsan Iqbal. Former premier Shahid Khaqan Abbasi, JUI-F leader Abdul Ghafoor Haideri, Hafiz Hamdullah, Hamidullah, Sikandar Sherpao and other officials attended the meeting.

Shahid Khaqan Abbasi told reporters after the meeting that 8 political parties participated in today’s meeting and the PDM meeting will be held in Karachi on August 29. He also stated that PDM is a coalition of opposition parties in the country. “PDM hopes that the affairs of the country will be conducted in accordance with the Constitution,” he added.

The former prime minister stated that PDM is a forum for discussing the supremacy of Pakistan’s constitution. “The meeting has established a timetable for meetings and gatherings in the country, which will be announced after the meeting on August 28.”

schools in sindh to remain closed for an indefinite period

Posted on April 8, 2020
Karachi: On Tuesday, a fire broke out in a warehouse in the Abidabad area of the city of Baldia in Karachi, which spread quickly...
Read More

Next Eid we will be on road to real independence: Imran Khan

Lockdown will be further relaxed in coming days: PM Imran

Posted on May 4, 2020
Islamabad: Prime Minister Imran Khan said on Monday that with the establishment of standard operating procedures (SOPs) based on preventive measures for all departments,...
Read More

Iran’s death toll from the coronavirus outbreak rises to 5,297

Posted on April 21, 2020
Dubai: Ministry of Health officials said that the number of deaths caused by COVID-19 respiratory diseases in Iran reached 5297 on Tuesday because it...
Read More