Islamabad: Pakistan has decided to reopen its border with Iran at four locations seven days a week from July 5 for trade.

According to the notification issued by Ministry of Interior on Friday, the border crossings at Gabd, Mand, Katagar and Chedgi will be opened in the light of decision taken by National Command and Operation Center in its meeting. 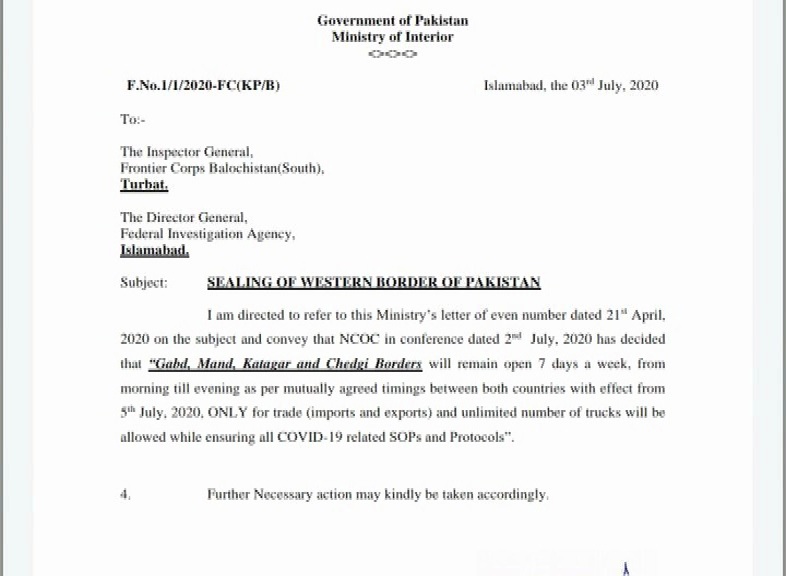 According to the mutual agreement between the two countries, the border will be opened seven days a week from morning to evening.

Posted on March 21, 2020March 21, 2020
The number of confirmed coronavirus cases in Pakistan has risen to 690, after new cases were reported across the country on Saturday. Sindh remains...
Read More

Posted on August 13, 2020
Karachi: Late Wednesday night, light rain in Karachi and its surrounding areas made the weather pleasant. Rain was reported in the Shahra-e-Faisal, Karsaz, Gulshan-e-Iqbal,...
Read More

SOPs not being followed, lockdown could be toughened if situation persists: Dr Zafar Mirza

Posted on May 25, 2020
Islamabad: Dr. Zafar Mirza warned that people did not take coronavirus seriously and did not follow the SOP. If the situation remains unchanged, the...
Read More

Posted on January 8, 2020
Islamabad: Special Assistant to the Prime Minister of News and Broadcasting, Dr. Fildos Ashke Awang, said Wednesday that the alliance of all political parties...
Read More