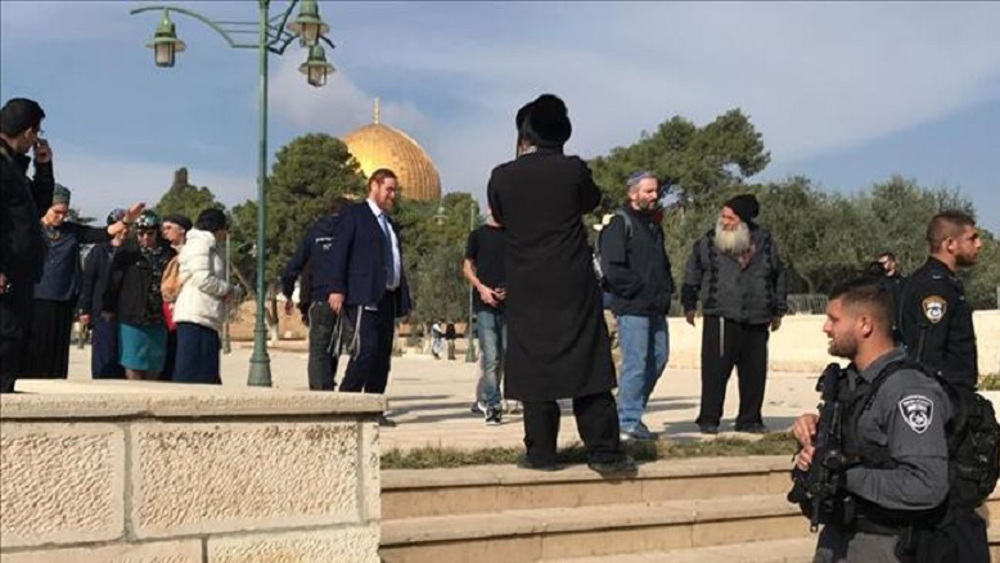 JERUSALEM: Israeli police on Monday confronted a Palestinian family who threatened to set themselves on fire on the roof of their home in a flashpoint district in Jerusalem as they face deportation.

Several members of the Salhiya family carried a gas canister on the roof of their home until night, when security forces deployed a large number of security forces on the streets of the Sheikh Jarrah neighbourhood in Israeli-annexed East Jerusalem.

“The family climbed onto the roof of the house and has threatened to set fire to themselves and the house if the occupation (Israeli) forces take control of it,” Muna ElKurd, an activist from the neighbourhood, told AFP.

“The family has lived in this house for decades,” added ElKurd, who was among the dozens of supporters and diplomats who arrived at the house that was surrounded by Israeli security forces.

The Salhiya family has been facing the threat of eviction since 2017, when the land where their home sits was allocated for school construction.

Police and the Jerusalem municipality said in a joint statement that delegates went to the home early Monday to carry out the eviction after the Salhiyas ignored “countless opportunities” to vacate the land as ordered.

“We ve been in this home since the 1950s,” said Salhiya family member Abdallah Ikermawi from the roof. “We don t have anywhere to go,” he said in quotes provided by the Sheikh Jarrah Committee organisation, adding that the family was made up of 15 people, including children.

An 11-day war between Israel and armed Palestinian factions in Gaza erupted last year, fuelled by anger in Sheikh Jarrah where families battled eviction orders. Witnesses told AFP on Monday that clashes between security forces and locals erupted after the police arrived, but later eased. Hundreds of Palestinians are facing evictions from their homes in Sheikh Jarrah and other east Jerusalem neighbourhoods. Circumstances surrounding the evictions threats vary.

‘Army will ask to roll back COAS extension law’

US seeks to salvage Afghan peace after attacks but leverage wanes

Posted on May 16, 2020
Washington: After the shocking attack, the United States is working hard to save the peace process in Afghanistan. As it plans to advance at...
Read More

US officials brace for ‘peak death week’ in coronavirus

Posted on April 6, 2020
Washington: On Monday, U.S. officials crowned the country ’s “peak death week” due to a coronavirus pandemic, as the increasing number of deaths in...
Read More

Posted on May 27, 2020
The US military has accused Russia of recently sending fighter jets to support Russian mercenaries to help place the Libyan National Army (LNA) commander...
Read More