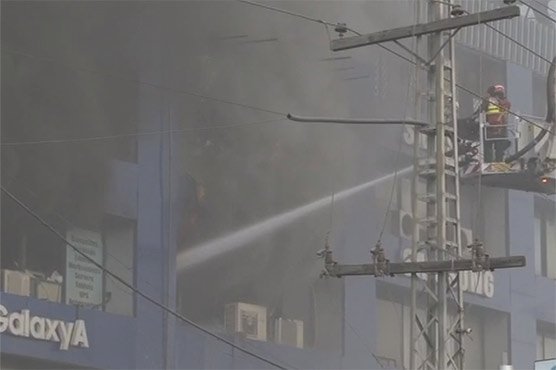 Lahore: The terrible fire at Lahore’s Hafeez Center has engulfed over 300 shops while valuable items of ninety percent shops have been destroyed by water used to extinguish the blaze.

After hours of struggle, the fire in the shopping plaza has been successfully extinguished, and the cooling process is in progress.

Security personnel sealed off the entire building and told them that goods worth millions of rupees had been burned to ashes.

Earlier, Sardar Usman Buzdar, the Chief Minister of Punjab State (CM), noticed the fire and set up an investigation team under the supervision of Lahore DC. He has also sought reports on the accident as early as possible.

Posted on February 24, 2020
KARACHI: A six-member team has been constituted to investigate into the Keamari poisonous gas leakage mystery that had resulted in the death of 14...
Read More

Posted on September 11, 2020
Karachi: The rescue operation has on Friday been completed after a four-storey building had collapsed in Korangi’s Allah Wala Town in Karachi on Thursday....
Read More

Posted on February 7, 2020
Islamabad: Minister of the Interior Brig (r) Ijaz Ahmad Shah clarified on Friday that Indian pilgrims without a passport may not enter Kartapur. The...
Read More

Posted on August 21, 2020
Islamabad: Information and Broadcasting Minister Syed Shibli Faraz said on Friday that he has stepped up efforts to return to the former prime minister...
Read More

Death toll rises to 253 as coronavirus infects 11,940 people across Pakistan

Posted on April 25, 2020
Lahore: Pakistan reported 253 new coronavirus deaths on Saturday, and the total number of cases has surged to 11,940. According to details, 5,046 patients...
Read More
National Style
Posted on December 8, 2019
LAHORE: The Pakistan Muslim League-Nawaz (PML-N), alongside other political parties, on Sunday has planned to hold protests in several cities against the ruling Pakistan...
Read More