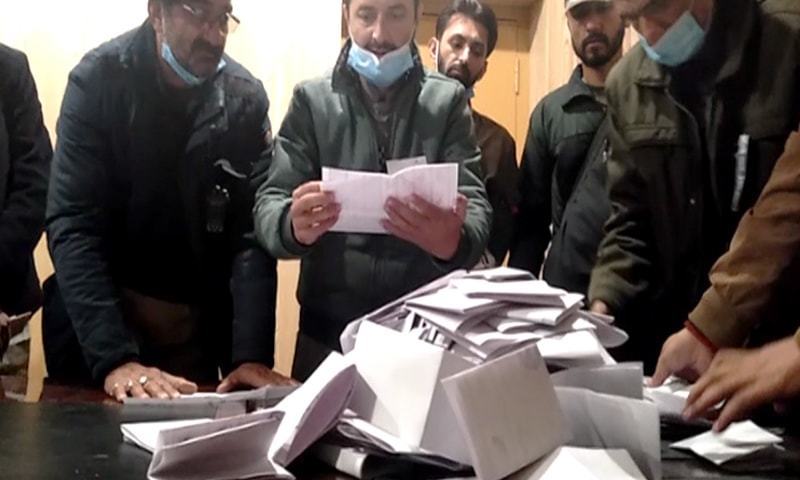 Gilgit: The polling for the Gilgit-Baltistan Legislative Assembly (GBLA) Gilgit-3 seat concluded peacefully and counting of votes is currently underway in the constituency on Sunday.

According to the detailed information, the polling starts at 8 am and continues until 5 pm without any interruption. In this electoral district, as many as 73 polling stations have been established, and a total of 41,360 registered voters exercise their right to vote in an atmosphere of freedom and fairness.

Bad weather cannot stop the enthusiasm of voters, because people trickle out of their homes and exercise concessions.

What needs to be mentioned here is that due to the death of Pakistan Tehreek-e-Insaf (PTI) candidate Syed Jafar Shah, the election of GBLA-3-Gilgit has been postponed.

The Pakistan Tehreek-e-Insaf (PTI) had secured two-third majority in the Gilgit Baltistan Legislative Assembly after six independent candidates had announced to join the party.

It is pertinent to mention here that seven candidates secured success in the Gilgit Baltistan polls as independent candidates and six of them had joined the PTI, giving it the numbers in the legislative assembly to achieve the two-third majority in the house of 24 members.

The new induction training increased the number of PTI members in the Legislative Assembly to 16, including 6 independent candidates, and also received the support of Majlis-e-Wahdatul Islamiceen (MWM), the Chief Justice of Parliament, who was in the polls. Get a seat.

Declared war against govt, retreating would be a sin: Fazlur Rehman

Posted on September 13, 2020
Karachi: The famous religious scholar Alama Said Zamil Akhtar Naqvi died in Karachi on Sunday from a cardiac arrest. According to the details, Alama...
Read More

Posted on April 23, 2020
Karachi: The Ruet-e-Hilal Committee, chaired by Chairman Mufti Muneebur Rehman, started the meeting at the  the Met Office in Karachi under the chair of...
Read More

Posted on December 18, 2020
PESHAWAR: Security forces arrested four terrorists, including a commander in banned clothing, and reportedly planned to carry out a major terrorist attack in Peshawar...
Read More

Posted on February 1, 2021
LAHORE: The health of Hamza Shehbaz, the leader of the opposition party in the Punjab Parliament, has deteriorated, according to a report by Dunya...
Read More