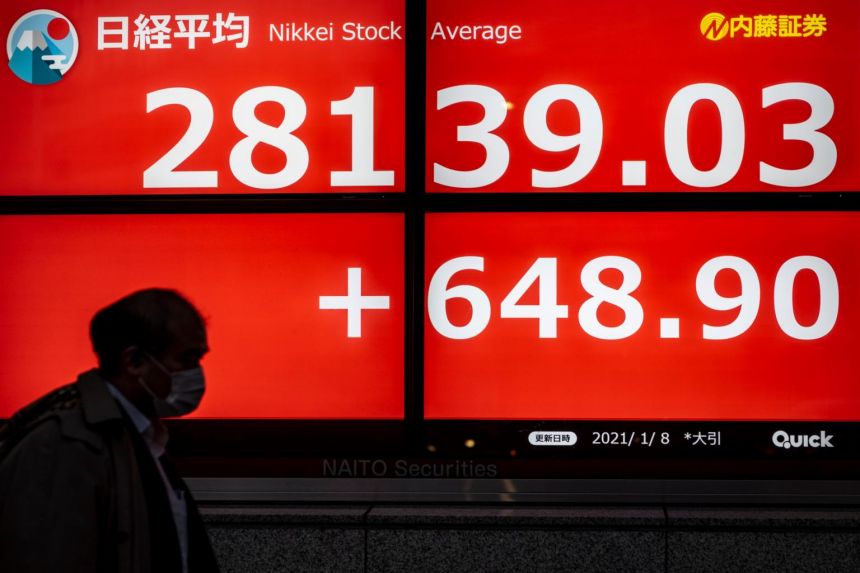 Hong Kong: Most Asian markets rose on Monday, but investor optimism about the global recovery was suppressed by concerns about the spread of the Delta Covid virus and Chinese regulatory crackdowns.

There are signs that U.S. lawmakers are agreeing on Joe Biden’s $1 trillion infrastructure bill, but these signs do not provide much impetus, and people are concerned about the release of U.S. employment data this weekend, because despite unemployment The rate remains high, but it is still difficult for companies to fill job vacancies.

As the latest sign of optimism in the global outlook, last week’s data showed that the US economy has returned to pre-pandemic levels — albeit at a slower rate than expected — while the euro zone’s expansion is much faster than expected.

However, observers say that as investors are increasingly worried about soaring inflation, many have warned that inflation may force the central bank to reduce ultra-loose monetary policy, so the rebound in global markets has been weakening for most of the past year.

In addition, some countries have slow vaccination plans, and the rapid spread of the Delta variant has led to the re-implementation of lockdowns and other containment measures.

After the authorities began cracking down on private tuition companies and the technology and real estate industries in the country last week, nervous traders are paying close attention to China.

Although officials and official media have tried to reassure the market in the face of collapse, these moves have raised concerns that other industries may become the next.

Posted on January 14, 2021
Islamabad: The Oil and Gas Regulatory Authority (OGRA) proposes to increase the price of petroleum products to 11.95 rupees per litre from January 15....
Read More

Posted on September 7, 2021September 7, 2021
Hong Kong: In the context of an increase in Delta coronavirus cases and signs of a slowing economic recovery, Asian investors are trying to...
Read More

Posted on February 9, 2021
Hong Kong: With the launch of vaccinations, the decline in infection rates and investors’ bets that Joe Biden will promote his massive stimulus plan,...
Read More

Posted on May 4, 2020
Karachi: In the inter-bank market, the US dollar has fallen below the 160 rupee mark and reached the trading price on Monday, March 24....
Read More

Posted on April 23, 2020
The Governor of the Central Bank of Pakistan said that Pakistan has taken a series of reform measures to strengthen its economy before the...
Read More

Posted on February 8, 2021
Hong Kong: I hope that US congressmen will pass Joe Biden’s huge stimulus package, which will help push up the Asian market again on...
Read More