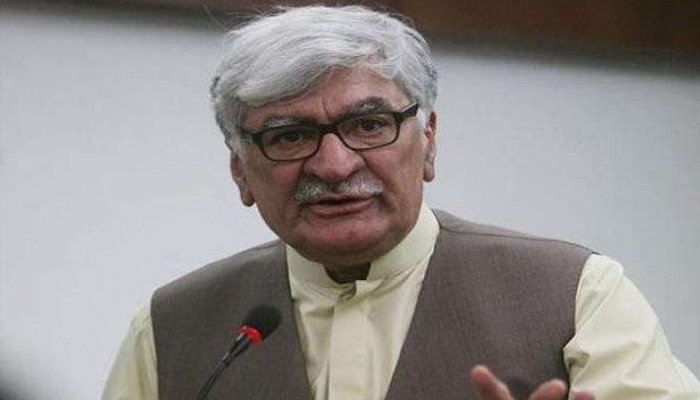 PESHAWAR: The Chief of the Awami National Party (ANP) Asfandyar Wali Khan has tested positive for the novel coronavirus, the Party’s spokesperson confirmed on Sunday.

Samar Haroon Bilour, the spokesperson for ANP, took to Twitter and announced that the party’s chief has contracted the virus as confirmed by his PCR test.

“The physicians have advised the ANP chief to follow proper protective measures against infections,” she wrote on Twitter, adding that Wali Khan has quarantined himself at Wali Bagh in Charsadda.

The spokesperson also called on everyone to pray for the leader’s speedy recovery.

Due to the current situation, the party decided to cancel all scheduled meetings.

Style World
Posted on March 12, 2021
Washington: U.S. President Biden met here on Friday with the leaders of Australia, India, and Japan, the core organization of his efforts to counter...
Read More

US Election 2020: Melania Trump ‘yanks’ her hand away from Donald Trump’s

Posted on October 24, 2020
A video clip of the First Lady of the United States (FLOTUS) Melania Trump ‘yanking’ her hand away from husband Donald Trump’s raised a...
Read More

Posted on September 2, 2020
Lahore: Pakistan has reported 18 deaths from the novel coronavirus in the past 24 hours, and the number of positive cases has soared to...
Read More

Posted on September 29, 2020
A woman died in a hospital in New Delhi a few weeks ago. A few weeks ago she said she had been raped by...
Read More

Posted on March 27, 2021
Pakistan Muslim League-Nawaz (PML-N) spokesman Marriyum Aurangzeb said Saturday that Nadeem Babar, the special assistant to the Prime Minister of Petroleum, should not only...
Read More

Posted on December 31, 2020
Lahore: Pakistan Muslim League-Nawaz (PML-N) senior leader Khawaja Asif was held at the Lahore Accountability Court on Thursday due to assets outside of known...
Read More