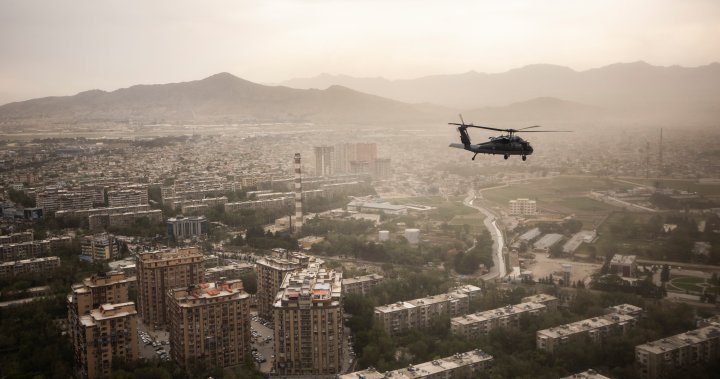 Kabul: The Ministry of the Interior said that an explosion outside a school in the Afghan capital on Saturday killed at least 25 people and injured 52 others, including students.

“Sadly, 25 martyrs and 52 wounded people have been evacuated to hospitals from the site,” ministry spokesman Tareq Arian told reporters.

“The casualties could rise.”

The blast occurred in the west Kabul district of Dasht-e-Barchi as residents were out for shopping ahead of Eid-al-Fitr next week that marks the end of Ramadan, the Muslim holy month of fasting.

The neighbourhood is populated largely by the Shiite Hazaras and is often a target for Sunni Islamist militants.

Arian s deputy Hamid Roshan told AFP that an investigation had begun into what he said was a “terrorist attack”, adding that casualties included students.

Health ministry spokesman Dastagir Nazari said several ambulances had been rushed to the site and were evacuating the wounded.

“People in the area are angry and have beaten a number of ambulance workers,” he told reporters.

At the time of the explosion, despite the faltering peace efforts between the Taliban and the Afghan government to end the decades-long war in Afghanistan, the US military continued to withdraw the remaining 2,500 soldiers from the country.

Officials often accused the Taliban of launching attacks in Kabul, which the insurgents firmly denied.

The Taliban have largely refrained from launching major attacks in Kabul since February last year, when they signed a deal with the United States that paved the way for peace talks and withdrawal of the remaining US troops.

However, even if the U.S. military continues to withdraw, the organization still clashed with the Afghan army in daily battles in the rugged countryside.

10 killed in blast inside quarry in India's Andhra Pradesh

Posted on August 10, 2020
LAHORE: Pakistan has reported 15 deaths from the novel coronavirus in the past 24 hours, and positive cases have surged to 284,660. The number...
Read More

Posted on May 5, 2020
London: According to data released on Tuesday, more than 30,000 people in the UK have died of suspicious COVID-19, which is the highest official...
Read More
National Style
Posted on November 22, 2019
LAHORE: The Lahore High Court (LHC) on Friday released interim written order in case pertaining to protests and sit-ins at The Mall. LHC judge...
Read More

Posted on March 17, 2020
Tehran: Iran announced on Tuesday that a further 135 new coronavirus deaths have brought the total death toll in the worst affected country to...
Read More

Posted on May 29, 2020
Islamabad: Prime Minister Imran Khan convened an important National Coordination Committee (NCC) meeting on May 31 to make a decision on the corona virus...
Read More