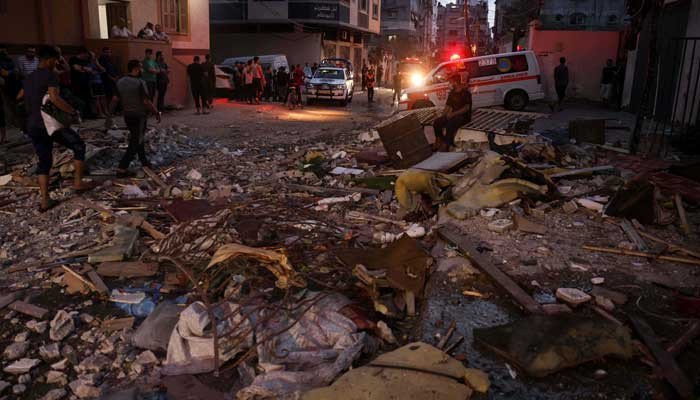 According to the Palestinian Ministry of Health, since the start of the offensive in the Gaza Strip, the death toll of Palestinians killed by Israeli forces has increased to 213, including 61 children and 36 women.

Obviously, there was no sign of efforts to ease and cease the war. The Palestinians throughout Israel and the occupied territories went on strike and took rare collective actions against Israeli policies. Following community violence and spasms in Israel and protests across the occupied West Bank last week, the general strike and anticipated protests may further amplify the conflict.

The new front of the conflict has opened, and the Israeli military has stated that it has also launched shelling on Lebanon in response to six failed rocket launches in the southern region of the neighboring country.

Since the fighting began last week, the Israeli military has launched hundreds of air strikes against innocent Palestinians.

Israel continued its airstrikes into Gaza, leaving behind a massive mound of rebar and concrete slabs in its attack on the six-story building that housed bookstores and educational centers used by the Islamic University and other colleges. Desks, office chairs, books and computer wires could be seen in the debris. Residents sifted through the rubble, searching for their belongings.

US President Joe Biden, having resisted joining other world leaders and much of his own Democratic party in calling for an immediate end to hostilities, told Netanyahu Monday night he backs a ceasefire, but stopped short of demanding a truce.

Biden s national security adviser Jake Sullivan said he had spoken to his Israeli counterpart and the Egyptian government, a key intermediary, on Monday, saying that Washington was engaged in “quiet, intensive diplomacy”.

Palestinians across the West Bank and in east Jerusalem mobilised Tuesday for protests and a general strike that shuttered non-essential businesses, in support of those under bombardment in Gaza.

Palestinian President Abbas’s Fatah movement called for a “day of anger”, and the Arab and ethnic towns in Israel echoed this call. Ramallah demonstrator Aya Dabur said: “We are here to express our voice and stand with the people of Gaza who were bombed.”

Posted on March 12, 2020
London: British Prime Minister Boris Johnson has once again refused to apologize for his derogatory and offensive remarks against Muslim women and for the...
Read More

New York to run out of ventilators in days: mayor

Posted on March 23, 2020
New York: The Mayor of New York warned on Sunday that New York had moved away from the equipment needed to keep hospitals running,...
Read More

Posted on May 30, 2020
Washington: According to data from Worldometer, the number of coronavirus cases worldwide has exceeded the 6 million mark, bringing the number of positive patients...
Read More

Posted on October 29, 2020
Yerevan: The Armenian separatist leader in the disputed Nagorno-Karabakh region said on Thursday that the Azerbaijani army has advanced within a few kilometers of...
Read More

WHO says first alerted to virus by its office, not China

Posted on July 4, 2020
Geneva: The World Health Organization has updated its description of the early stages of the COVID crisis, saying that its own office in China...
Read More