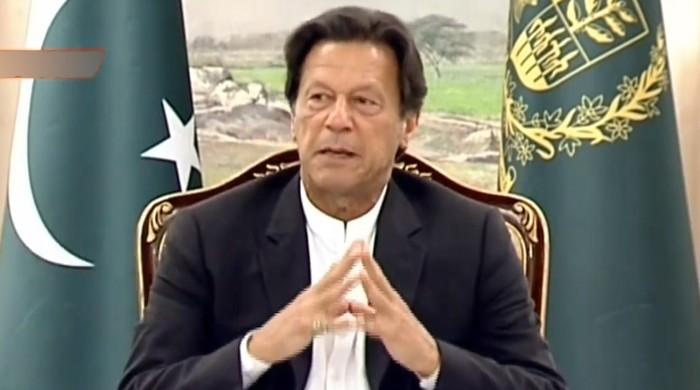 ISLAMABAD: Pakistan Tehreek-e-Insaf (PTI) Chairman Imran Khan on Saturday said that what ‘imported’ government did in Sialkot against party leadership and workers is outrageous but not unexpected.

Imran Khan said in a series of tweets that he will travel to Sialkot today, no doubt about it.

Former prime minister lambasted government and said, “This bunch of criminals out on bail and their convict mafia boss in London have always used fascist tactics against opponents”.

He further said, “when they are in power – storming of SC, Model Town murders, bribing judges, Nawaz Sharif trying to declare himself Amir ul Momineen. They use and abuse democracy when in opposition and totally destroy all democratic norms when in power. But people have now risen against them”.

“Our government never stopped any of their jalsas (rallies) and sit-ins because we are committed to democracy. I will be in Sialkot today & I am calling on all our people to come out and protest in their areas/cities after Isha prayers against this fascist imported government.”

It merits mention that PTI has announced to change venue of public rally to VIP ground after police crackdown on party workers and arrest of Usman Dar.

PTI Punjab President Shavkat Mahmood told a news conference with other party leaders that their Peace Party members were tortured by the police and claimed that the police operation was launched in the direction of Khawaja Asif.

The former minister strongly condemned the arrest of PTI leaders and workers and demanded their immediate release, reiterating that a rally would be held in the city regardless.

PTI leaders said they wanted to exercise their rights in a democratic way and called for the government to wake up. He added that the government was bent on the use of force and warned that it would be held responsible if something unpleasant happened.

Earlier, police arrested PTI leader Usman Dar and after a scuffle broke out between PTI workers and police at the venue of PTI chief Imran Khan’s public meeting.

Police entered the venue of PTI public meeting claiming that the district administration had not allowed the party to hold public meeting at CTI Ground in Sialkot.

Posted on March 15, 2020March 15, 2020
Punjab health minister said on Sunday that Punjab had confirmed a coronavirus case in Lahore, the first case in the province with the virus....
Read More

Posted on April 10, 2022April 10, 2022
ISLAMABAD: Chairman of Pakistan Tehreek-e-Insaf (PTI) Imran Khan and his cabinet have been de-notified on Sunday. The Cabinet Department has issued a notification that...
Read More

Posted on May 22, 2022May 22, 2022
Lahore: Punjab Chief Minister Hamza Shehbaz called a key meeting on law and order on Monday after Pakistan’s Tehreek-e-Insaaf (PTI) announced the dates of...
Read More