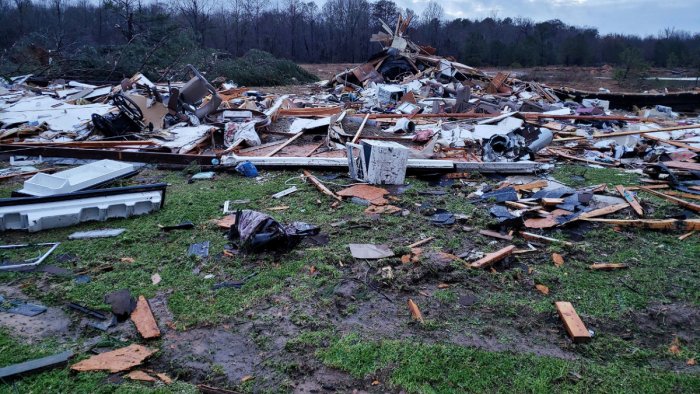 MAYFIELD: Rescuers were forced to crawl over the dead and found the survivors in the Kentucky candle factory that was hit by a tornado. This was part of an unusual cluster that killed dozens of people in the Midwest and South and razed entire towns to the ground. .

By the time the church attendees gathered together to pray for the lost on Sunday morning, more than 24 hours had passed since they discovered that anyone was still alive. Instead, the staff restored people’s lives-including a backpack, a pair of shoes and a mobile phone with 27 missed messages. Despite this, the exact death toll is still elusive, although it is expected to be lower than initially feared.

To date, Kentucky has been the worst hit among tornado groups in several states, which is remarkable because they occur during the year when cold weather usually limits the duration of tornadoes. They killed at least 8 people at the Mayfield Consumer Goods Candle Factory in the state, and another 12 people died in Bowling Green and surrounding areas. At least 14 people died in Illinois, Tennessee, Arkansas and Missouri.

Confused about how many people were able to escape from the factory and the difficulty of finding other hardest-hit areas, the authorities are still working to determine the total number of deaths. In some places, tornadoes have made house-to-house searches impossible. “There is no door,” said Kentucky Governor Andy Beshir.

He said: “We will have more than 1,000 houses disappeared, just disappeared.”

Bashir said on Saturday that only 40 of the 110 people working in the candle factory were rescued at the time. “It would be a miracle if other people were found inside.” But on Sunday, the company said that although there were 8 confirmed People died, 8 people are still missing, but more than 90 people have been found.

“Many of the employees were gathered in the tornado shelter and after the storm was over they left the plant and went to their homes,” said Bob Ferguson, a spokesman for the company. “With the power out and no landline they were hard to reach initially. We’re hoping to find more of those eight unaccounted as we try their home residences.”

Night-shift workers were in the middle of the holiday rush, cranking out candles, when the word went out to seek shelter.

For Autumn Kirks, that meant tossing aside wax and fragrance buckets to make an improvised safe place. She glanced away from her boyfriend, Lannis Ward, who was about 10 feet away at the time.

Suddenly, she saw sky and lightning where a wall had been, and Ward had vanished.

“I remember taking my eyes off of him for a second, and then he was gone,” Kirks said.

Later that day, she received terrible news that Ward was killed in the storm.

“It was indescribable,” Pastor Joel Cauley said of the disaster scene. “It was almost like you were in a twilight zone. You could smell the aroma of candles, and you could hear the cries of people for help. Candle smells and all the sirens is not something I ever expected to experience at the same time.”

Four twisters hit Kentucky in all, including one with an extraordinarily long path of about 200 miles (322 kilometers), authorities said. Beshear had said Sunday morning that the state’s toll could exceed 100. But after state officials heard the candle company’s update, he said that afternoon it might be as low as 50.

“We are praying that maybe original estimates of those we have lost were wrong. If so, it’s going to be pretty wonderful,” the governor said.

The high temperature forecast in the afternoon was only in their 40s, and thousands of people were out of power. Approximately 300 members of the National Guard went door-to-door to inspect personnel and help remove debris. The dead dog is looking for the victim.

The outbreak also killed at least six people in Illinois, where an Amazon distribution center in Edwardsville was hit; four in Tennessee; two in Arkansas, where a nursing home was destroyed and the governor said workers shielded residents with their own bodies; and two in Missouri.

Pope Francis expressed his sadness over the “devastating impact” of the tornadoes. In a telegram sent Monday by Vatican secretary of state, Cardinal Pietro Parolin, the pope offered prayers for those who died, “comfort to those who mourn their loss and strength to all those affected by this immense tragedy.”

Debris from destroyed buildings and shredded trees covered the ground in Mayfield, a city of about 10,000 in western Kentucky. Twisted sheet metal, downed power lines and wrecked vehicles lined the streets. Windows were blown out and roofs torn off the buildings that were still standing.

In the shadows of their crumpled church sanctuaries, two congregations in Mayfield came together on Sunday to pray for those who were lost. Members of First Christian Church and First Presbyterian Church met in a parking lot surrounded by rubble, piles of broken bricks and metal.

“Our little town will never be the same, but we’re resilient,” Laura McClendon said. “We’ll get there, but it’s going to take a long time.”

Posted on March 20, 2020
Beijing: China has no new local cases of deadly coronavirus for the second consecutive day on Friday, but progress in fighting the disease is...
Read More

Posted on June 3, 2021June 3, 2021
Karachi: With the improvement of the province’s coronavirus situation, the Sindh provincial government decided to relax the lockdown on Thursday. The government will announce...
Read More

Posted on May 27, 2020
Rio de Janeiro: Brazil announced the highest daily number of global COVID-19 deaths on Tuesday, with 1039 deaths. The country has ranked first for...
Read More

Posted on October 27, 2020
DHAKA: Tens of thousands of protesters marched through the Bangladesh capital on Tuesday calling for a boycott of French products and burning an effigy...
Read More
National Style
Posted on December 2, 2019
ISLAMABAD: Punjab Chief Minister Sardar Usman Buzdar Monday said that the provisional government is committed to make every citizen of the province computer literate....
Read More