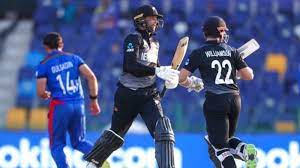 Abu Dhabi: In the key game of the ICC T20 World Cup, New Zealand defeated Afghanistan with eight wickets, knocked out India from the semifinals, and secured its place in the semifinals on Sunday.

Chasing a moderate 125, Captain Kane Williamson (40) and Devon Conway (36) took the team home with an unbeaten record of 68, leading Abu Dhabi with an 18.1 score.

The New Zealanders joined Pakistan as two teams in the semifinals of Group 2, which put India in a deadlock in the final game against Namibia on Monday.

England and Australia have entered the semifinals from the first group.

The semi-final match will be decided after Pakistan faces Scotland in the second match of the day.

“It was a strong performance,” said Williamson.

“We know how dangerous this Afghanistan side is. It was good for us to be able to set the tone with the ball, take wickets early and then keep them to below-par total. 150-155 would have been par.”

Unless unbeaten Pakistan suffer a shock defeat to Scotland in Sharjah later Sunday, the Kiwis will face England in the semi-finals.

Pakistan would take on Australia in the other semi-final.

“There’s another strong challenge coming up. England are a very strong side,” said Williamson.

“For us it is important we keep learning and building.”

Afghanistan skipper Mohammad Nabi admitted making only 124 was never likely to be enough.

Posted on October 24, 2021October 24, 2021
India and Pakistan renew their high-profile but one-sided cricket rivalry on Sunday in a T20 World Cup blockbuster watched by hundreds of millions of...
Read More

Posted on March 11, 2020
Lahore: Table-toppers Multan Sultans will play against sixth-ranked Quetta Gladiators in the 25th match of the Pakistan Super League (PSL) on Wednesday (today) at...
Read More
Sports
Posted on December 27, 2019
London: After the French returned due to long-term casualties and layoffs, Paul Pogba was hailed by Manchester United coach Ole Gunnar Solskjaer as “the...
Read More