In his tweet, Fawad Chaudhry said to end ban on PUBG in Pakistan is a sane approach and ban is an extreme measure must be very careful in future.

Earlier, the Pakistan Telecommunications Authority (PTA) finally lifted the ban on the popular mobile game PUBG after enthusiastic calls from the public.

The PTA stated in a press release issued on Thursday that the authorities held a meeting with the legal representative of Proxima Beta Pte Ltd (PB).

Company representatives briefly introduced to PTA members the queries raised by PTA regarding the control measures taken to prevent abuse of the gaming platform.

The Administration expressed satisfaction with the measures taken by PB so far and emphasized its continued participation and establishment of a comprehensive control mechanism.

It said the representative of PB welcomed PTA’s feedback on the issue and assured that the concerns of PTA would be taken into account. In addition, the company requested PTA to unban PUBG.

Keeping in view the positive engagement and response of the company, the Authority has finally decided to unban PUBG. 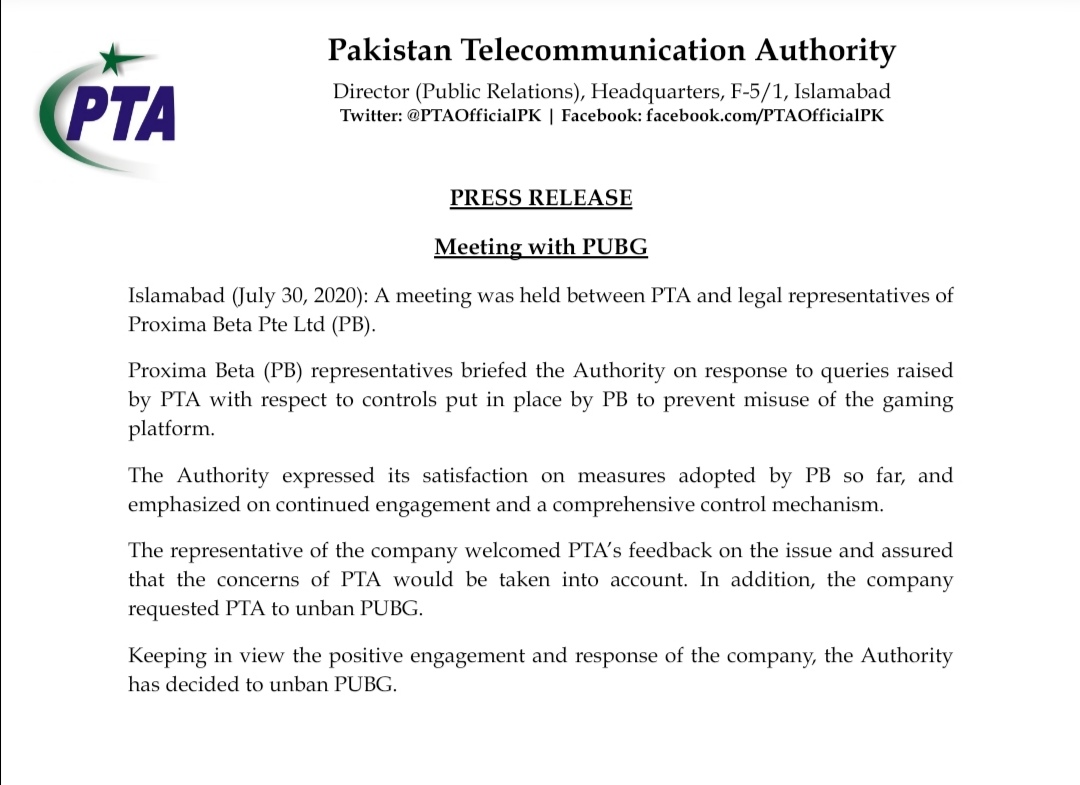 Posted on July 21, 2020July 21, 2020
Islamabad: The Pakistan Telecommunications Authority (PTA) blocked the Bigo App on Monday and warned TikTok for the last time, otherwise it will also be...
Read More

China would rather see TikTok US close than a forced sale

Posted on September 12, 2020
Three people with direct knowledge of the matter said on Friday that Beijing opposed the Chinese owner ByteDance’s forcible sale of TikTok’s business in...
Read More

Posted on August 17, 2020August 17, 2020
International Business Machines Corporation (IBM.N) announced on Monday a new type of processor chip for data centers, which is said to be able to...
Read More

National Style
Posted on September 14, 2020
Lahore: According to preliminary investigations, security personnel did not find the suspected co-defendant Waqar-ul-Hassan. He appeared in court at...
Read More